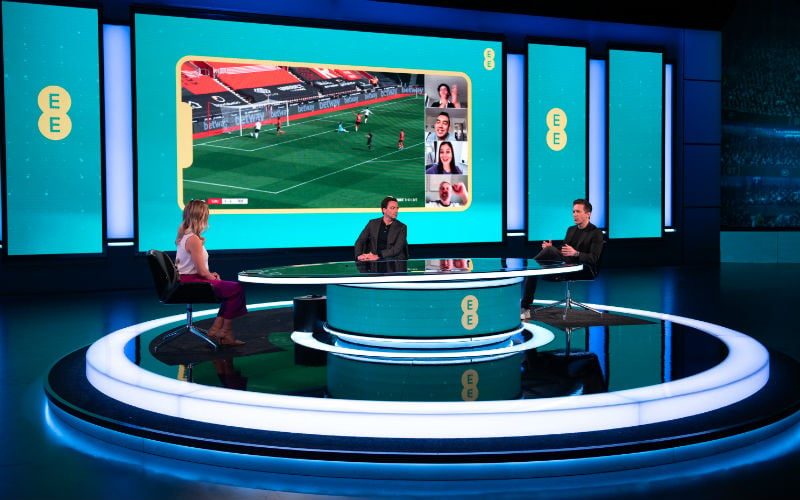 This weekend will see the launch of a range of 5G-enabled features on BT Sport’s app for live football coverage.

However the ‘Match Day Experience’ is only available for EE ‘Full Works’ plan customers who have the new iPhone 12.

The features, which take advantage of enhanced latency and bandwidth, allow customers to take control of their viewing experience. They include an interactive timeline, multi-cam replays, and the ability to watch with friends via split screen.

‘Watch Together’ allows fans to watch, see and chat with three other friends, alongside any BT Sport broadcast, thanks to a split-screen interface. Customers with the Full Works plan can create their own Watch Together rooms and invite any other BT Sport customer to join them to create a unique match viewing experience.

For those EE customers who take out the large screen access add-on, Watch Together can now be enjoyed on their living room television by pairing their mobile phone with an Apple TV.

‘360’ allows them to watch live action from a range of sporting events in 360 degrees, selecting different camera angles and viewpoints not normally seen in broadcast.

It includes a new ‘pinch and zoom’ functionality which enables fans to home in on their desired areas of interest – in theory making them feel like they are at the ground.

‘Stadium Experience’ allows customers to use an AR doorway in the BT Sport app to be transported to exclusive behind the scenes experiences of leading football teams and sporting stadiums. Depending on the club and stadium, these include areas such as dressing rooms, dugouts, trophy rooms and tunnel areas.

‘Manager Mode’ allows customers to add real-time graphics as part of the match coverage augmented on the pitch, such as a mini-map tracking the positions of players, player names, speeds and more such as tracers marking the path of shots.

“At this moment of social distancing and crowd-less stadia, Match Day Experience gets fans closer than ever to the sports they love,” said former England captain and BT Sport pundit Rio Ferdinand.

“The features build on what is already the best sports App anywhere and will enable EE customers to enjoy the most immersive sports broadcasts seen to date.”

Marc Allera, CEO of BT’s consumer division, said: “We continually look for ways to offer customers new and innovative services, allowing them to make the most from their smartphone. Our new Match Day Experience features will provide an amazing array of ways to enhance their sports viewing – over the UK’s number one network for 5G.

“They can now watch the action live with their mates thanks to integrated video chat. Get closer to the game with the best ever 360° views, and view real-time stats and graphics projected on the pitch and around each player with Manager Mode.

“What’s more – only with us can they also get up-close and personal, with advanced Match Day Live AR features – ensuring that when they’re out and about, they can always get the best seats in the house.”

Games to feature the new experiences: