Develop your own digital talent before looking elsewhere

Posted on September 12, 2018 by Alistair Hardaker

Develop your own digital talent before looking elsewhere

A key figure at American tech giant Pluralsight told a conference in Manchester that the answer to the riddle of digital transformation lies inside their organisations.

Tommy Barlow, EMEA director of commercial sales at Pluralsight, told the Digital Transformation Conference at Manchester’s Bridgewater Hall on Wednesday that transforming their businesses into efficient digital machines is a human-led process.

Indeed their own staff are those best-placed to drive the digital revolution – provided they are given the appropriate training and opportunity to “practice”.

“Develop and retain the team you already have [rather than bring in talent from outside],” American Barlow told the audience.

Barlow’s lightbulb moment came when his father lost his leg in his seventies. The new prosthetic limb came with an app – and it became clear to Barlow that technology and humanity work best in harmony. 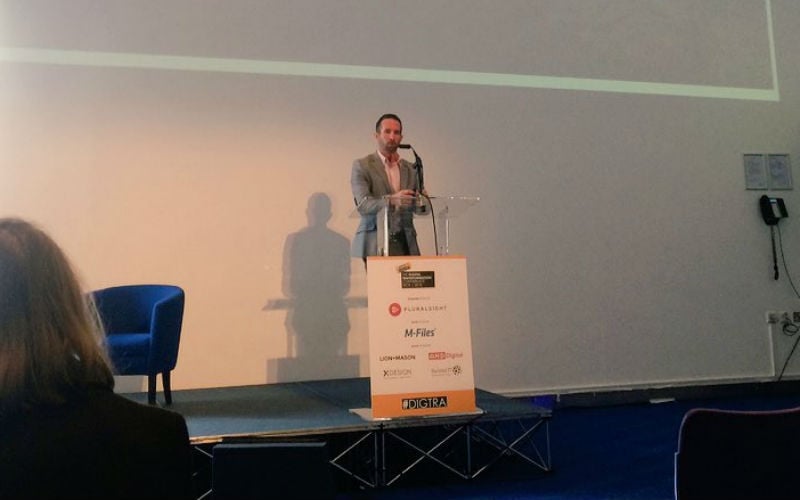 He says this has powered his approach as part of Pluralsight, which aims to provide developers, IT and cyber security professionals with access to world leading tuition online.

“Developing digital talent is the only way to get a true competitive advantage,” he said.

“In business employees are dissuaded from practising. We need to set aside sacred time for practice.

“People generally like to learn, but companies don’t know how to teach them.”

Carl Burton, head of product at Co-Op Digital, agrees with the human-led approach.

He and his team were tasked with creating a new piece of software for Co-Op Funeralcare which would allow them to move toward a paperless, connected process.

While developing the ‘Guardian’ software, his team relocated to same floor as the Funeralcare staff to encourage casual conversation with the people who would actually use the technology.

They also held a series of trials in branches located around the UK.

“Funerals are highly variable – they are not a production line,” he explained. “The UK is very diverse and we didn’t want to build a product that only worked in one place.”

The team, which are still working on constant refinement of the software, consider themselves “a product team, not a project team”.

The resulting software has collected industry awards and even resulted in Co-Op employees tweeting positively about the software without prompting.

“If you haven’t got trust, you’re doomed to fail. Digital transformation isn’t fixed. The pace of change means it’s never completed,” he added.

Performance coach Ross Mackenzie of BigThingk, interviewed by Tech North Advocates co-founder Naomi Timperley, encouraged attendees to think beyond the technology they were developing and focus on the end-user.

He advised that business leaders should consider “the outcome of the outcome”.

“What will now become possible for the client that wasn’t possible before?” he asked. “What will be different now they are using your product or service?”

Mackenzie, who has coached corporate and personal and sporting giants including English golfing pro Lee Westwood, said tech companies are very passionate about what they’ve created. “But there is a chance of being blindsided. The only thing that matters is the client experience,” he said.