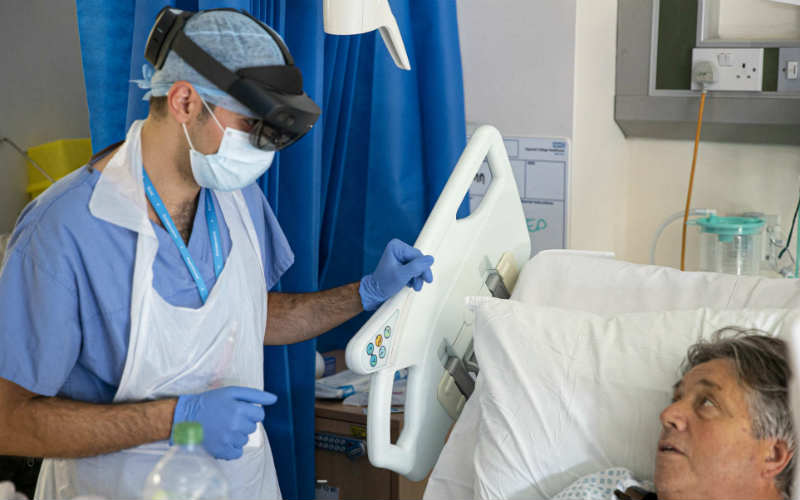 A project has deployed mixed-reality headsets in hospitals to keep doctors safe.

Staff at Imperial College Healthcare NHS Trust are wearing the Microsoft HoloLens headsets as they work on the frontline in the most high-risk area of some of London’s busiest hospitals.

HoloLens with Dynamics 365 Remote Assist uses Microsoft Teams to send a secure live video feed to a computer screen in a nearby room, allowing healthcare teams to see everything the doctor treating COVID-19 patients can see, while remaining at a safe distance.

Imperial College Healthcare NHS Trust, which includes Charing Cross Hospital, Hammersmith Hospital and St Mary’s Hospital, says using HoloLens has led to a fall in the amount of time staff are spending in high-risk areas of up to 83%.

It is also significantly reducing the amount of personal protective equipment (PPE) being used, as only the doctor wearing the headset has to dress in PPE. Early estimates suggest that using HoloLens is saving up to 700 items of PPE per ward, per week.

Clinical academics James Kinross and Guy Martin, from the Department of Surgery and Cancer at Imperial College London, have been working in partnership with Microsoft and Imperial College Healthcare to deliver the project, to improve the quality of care given to patients and to protect staff during COVID-19.

Dr Kinross, who is also a consultant surgeon at Imperial College Healthcare, said: “In March, we had a hospital full of COVID-19 patients. Doctors, nurses and allied healthcare professionals providing ward care had a high risk of exposure to the virus and many became ill. Protecting staff was a major motivating factor for this work, but so was protecting patients. If our staff are ill they can transmit disease and they are unable to provide expert medical care to those who needed it most.

“In one week our hospital trust switched from being a place that delivered acute, elective care and planned treatment into a giant intensive care unit. We weren’t just trying to restructure an entire building, we were trying to redeploy and retrain our staff, while at the same time we had to cope with an ever-growing number of very sick people.

“We needed an innovative solution. I’ve used HoloLens before in surgery and we quickly realised it had a unique role to play because we could take advantage of its hands-free telemedicine capabilities. Most importantly, it could be used while wearing PPE. It solved a major problem for us during a crisis, by allowing us to keep treating very ill patients while limiting our exposure to a deadly virus. Not only that, it reduced our PPE consumption and significantly improved the efficiency of our ward rounds.”

Rather than put users in a fully computer-generated world, as virtual reality does, HoloLens allows users to place 3D digital models in the room alongside them and interact with them using gestures, gaze and voice.

Using Remote Assist, doctors wearing HoloLens on the COVID-19 wards can hold hands-free Teams video calls with colleagues and experts anywhere in the world. They can receive advice, interacting with the caller and the patient at the same time, while medical notes and X-rays can also be placed alongside the call in the wearer’s field of view.

“We’re now looking into other areas where we can use HoloLens because it is improving healthcare without removing the human; you still have a doctor next to your bed, treating you,” Kinross said. “Patients like it, too. They are interested in this new piece of technology that’s helping them.”

Kinross has also helped other departments use HoloLens, including intensive care, trauma and in surgery, where it is being used to overlay CT scans onto patients during operations.

HoloLens is also being used to teach students at Imperial College London’s medical school, after the COVID-19 pandemic led to the academic areas to close “practically overnight”, Kinross said. Students can use laptops and mobile devices at home to watch a live feed from lecturers wearing HoloLens and learn about a range of topics including anatomy, surgery and cardiology.

These projects form part of PanSurg, a global initiative established in response to the threat the COVID-19 pandemic poses to surgical patients and the people that look after them. PanSurg is a group of clinicians, surgeons and academics from Imperial College London’s Department of Surgery and Cancer and its Institute of Global Health Innovation.